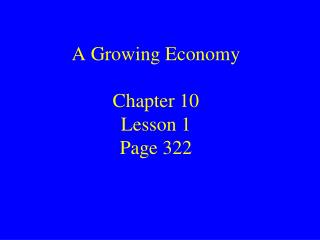 A Growing Economy - . what is an economic boom?. a rapid growth in a country’s moneymaking that leads to increased

A Growing Economy - . the rise of new industries. in the 1920s the automobile became an important part of america life

Chapter 10 Lesson 1 - . ties to great britain. the paxton boys. a group of 57 frontiers who were angry because indians

MISSISSIPPI: A Growing Economy - . mississippi has a strong business climate . we rank in the top states nationally ….

Growing in a Slowing Economy - . stay profitable in a tough economy. learning objectives. at the end of this module, you

Growing in a Recovering Economy - . take advantage of improved economic outlook. learning objectives. at the end of this

Lesson 10-1 - . turning savings into investments financing business operations and growth in an important part of the

Lesson 10 - 1 - . comparing two proportions. objectives. determine whether the conditions for performing inference are