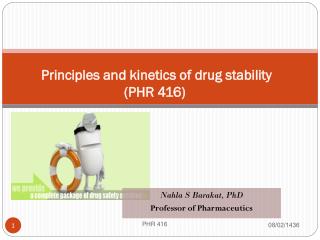 Principles of Motion and STability - . chapter 3 . movement principles can be applied to a variety of movements to

Principles of Bioenergetics and Catalysis  Kinetics - . lec 1 substrate diffusion and catalyis. what are bacteria? the

Stability of Drug Preparations - . chapter 12. i. introduction. a.importance stability is the guarantee of safety and

Principles of Reactivity: Chemical Kinetics - . chapter 15. kinetics. chemical kinetics is the study of the rates of

Personal Health Records - . what is a phr?. phr is a tool for collecting, tracking and sharing important, up-to-date