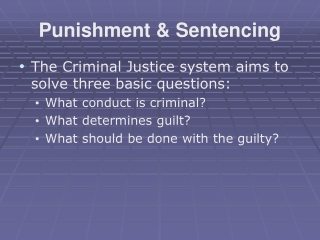 Punishment & Sentencing. The Criminal Justice system aims to solve three basic questions: What conduct is criminal? What determines guilt? What should be done with the guilty?. Douglas County Court. The Goals of Punishment. Juvenile Justice - . accountability in the court of law. the big question. if you committed a crime, do you think it

The Basics of Sex Offender Sentencing in Washington - . prepared by jim morishima office of program research.

A2 Crime and Deviance - . control and punishment . learning outcomes . understand and evaluate a range of crime

SENTENCING IN CANADA - . definition:. sentence: punishment imposed on a person convicted of committing a crime. goals:.

Sentencing: - . once guilt has been determined, the next step is to decide what to do to the offender what should

Deciding on a Punishment - . sentencing is a difficult job for a judge. there is much at stake. safety of society freedom

Punishment - . controversies and difference in delineation positive and negative punishment. punishment and parenting.