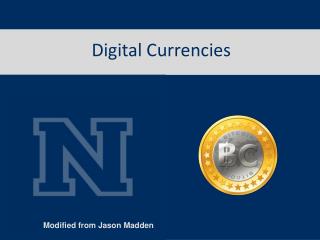 Digital Currencies. Modified from Jason Madden. Introduction: What is Money?. Physical or Electronic Tokens or Commodities that can be have the following properties: Unit of Account  defined value Medium of Exchange  acceptability Store of Value  non-perishable. CURRENCIES - . what’s in your wallet?. how many currencies are in use around the world?. 178. has anyone traveled out

Crypto-currencies - Icos are in fashion now and will be for a long time to come. if you know anything about the crypto

European Currencies - . what is the european union?. it is a group of 27 countries who have come together to have

Migotrade - Trade Currencies - And most importantly, we will help you maintain that level to maximize profits in the long

Central Banks Worldwide Race To Launch Own Digital Currencies - Es, drawn and written by herbert sim, also known as 'the

Currencies and Exchange Rates - . to buy goods and services produced in another country we need money of that country.