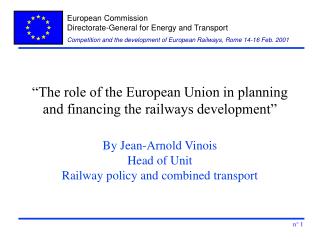 “The role of the European Union in planning and financing the railways development”. By Jean-Arnold Vinois Head of Unit Railway policy and combined transport. 307. 1970 = base 100. 90. The EU fundings for rail infrastructure, an overview: TransEuropean Networks (TEN-T) Cohesion fund Let’s Learn About Austria - . wwp.european-union-eu.com. where is austria?. map of austria. www.exportinfo.org. a few

Community Planning and Development Programs - . getting involved through the consolidated planning process. module 3

This project is funded by the European Union Projekat finansira Evropska Unija - . topics addressed in development of