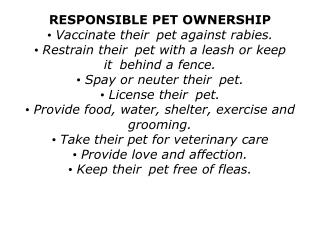 Responsible Gun Ownership: Finding the Right Gun Safe - Having a safe place to put your firearms is one of the key

How to Become A Responsible Pet Owner - Pets are not accessories that can be thrown aside and overlooked. pets are

How to Be A Responsible Pet Parent - Along with the joy of having a furry pal as your companion, pet parenting comes with

Ownership - . chapter 14. ownership. god gave man the earth and its resources to use, enjoy, appreciate, and share freely