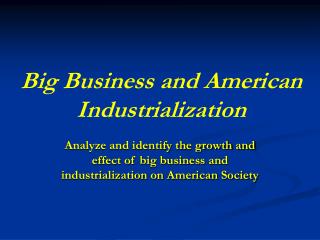 Industrialization and Big Business - The railroad boom. between 1865-1900largely supported by the governmentthrough

Big Business and Labor - . andrew carnegie . entered the steel business in 1873 modeled his industry off of great

Big Business and Labor - . chapter 6-3. the big bad guys of business and labor! who are they?. part a –answers the

Capitalism and Big Business - . what is capitalism?. a type of economy ownership of the means of production,

Monopolies and Big Business - . by will briggs in association with tristan and josh. definition of monopolies. the

INDUSTRY AND BIG BUSINESS - . what is a monopoly? what does “capitalist system” mean? if you have stock in a company,

BIG BUSINESS - . read about three successful entrepreneurs talk about their business on page 22 ! what are the two most