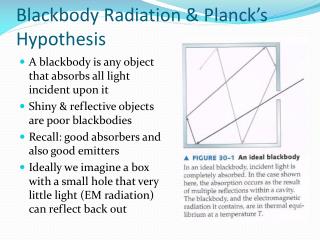 Blackbody Radiation & Planck’s Hypothesis. A blackbody is any object that absorbs all light incident upon it Shiny & reflective objects are poor blackbodies Recall: good absorbers and also good emitters Blackbody - . a black body is an ideal system that absorbs all radiation incident on it the electromagnetic radiation

Chapter 2 Laser and Atom Interaction - . 2.1 planck radiation and einstein a and b. maxwell equations. energy density and

Radiation - . basics of radiation. energy that comes from a source and travels through material or space. light, heat and

Quantum Physics - . ….and you thought i couldn’t use powerpoint. blackbody radiation. all objects radiate thermal

4-2 Quantum Theory - . planck’s theory. max planck predicted accurately how the spectrum of radiation emitted by an

Two Conditions for an object to emit Blackbody Radiation: - It must be at a uniform temperature. (one average speed for

Week 5 – September 30, 2003 - . blackbody radiation: monochromatic irradiance of radiation emitted by a blackbody at