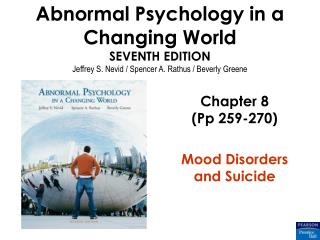 Chapter 8 (Pp 259-270) Mood Disorders and Suicide. CAUSAL FACTORS IN DEPRESSIVE DISORDERS. Stress and Depression. Stress plays an important role in determining vulnerability in bipolar disorder and even more strongly in major depression. Sources of stress may include: Chapter 8: Recognizing Arguments - . premise indicators (pp. 58-59). some words tend to show that a statement is a

Chapter 8 (continued) Enzymes - . you should read the entire chapter. for the midterm, you will no t be tested on the