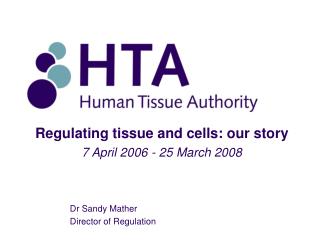 Regulating tissue and cells: our story 7 April 2006 - 25 March 2008. Dr Sandy Mather Director of Regulation. Aims. To share some of the highlights of the last two years in the life of HTA To explain our risk based regulatory system Tissues and Membranes - . anatomy chapter 5. body tissues. a tissue is a group of cells that have similar structures and

Diseases of Blood Cells - . back to basics. blood is a liquid tissue a mixture of cells and water the water contains

LIVER ABSCESS - . occurs when bacteria/protozoa destroy hepatic tissue, produces a cavity which fills up with infective