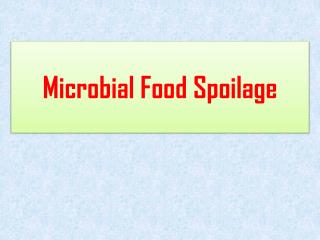 Microbial Food Spoilage. Microbial food spoilage occurs as a consequence of either microbial growth in a food or release of extracellular and intracellular(following cell lysis ) enzymes in the food environment. Signs of spoilage of different types of food: Changes in color Food spoilage - . what causes it how to minimize it. you know it when you see it or smell it or taste it. inmagine.com.

FOOD SPOILAGE AND PRESERVATION - . facilitator : jasmina sangani. hygiene and food safety. food has to be protected at

Microbial Spoilage of Food - . microbial spoilage of food. a food product is defined as “spoiled” if “sensory

Food Spoilage - . what is food spoilage. spoilage is a natural phenomenon. it occurs at varying rates depending on the

Food spoilage organisms - . lesson objective – to understand the conditions that cause food spoilage. questions. do you