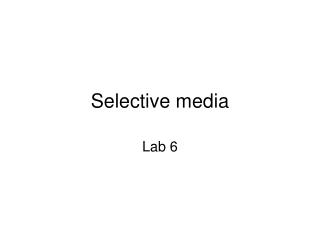 SELECTIVE BREEDING - . amanda, trey, pedro and chelsea . what is selective

Introduction - . in addition to general-purpose media, which allow the growth of most types of bacteria, microbiologists

Selective Mutism - . by g illian trammell. what is selective mutism ?. s.m is the inability to speak in certain settings

Using the Media - . using the media. direct strategy, not a “media strategy” media is not a method for winning media

SELECTIVE FEDING PROGRAMMES SESSION 20 - . selective feding programme. there are two mechanisms through which food may be