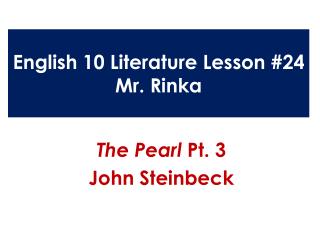 English 10 Literature Lesson #24 Mr. Rinka. The Pearl Pt. 3 John Steinbeck. The Pearl by John Steinbeck http://www.scribd.com/doc/8703693/The-Pearl-John-Steinbeck. III A town is a thing like a colonial animal. A town has a nervous system and a head and shoulders and feet. A town is English 10 Literature Lesson #14 Mr. Rinka - . the interlopers an analysis. setting. the time and place in which a story,