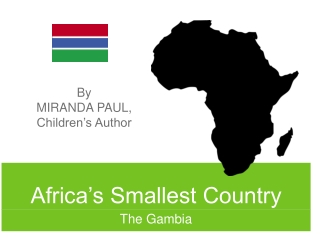 Africa’s Smallest Country. By MIRANDA PAUL, Children’s Author. The Gambia. Where is The Gambia?. In WEST Africa, surrounded by Senegal except for one side that touches the Atlantic Ocean Africa - . during time of slavery primarily sub-saharan africa africa is not a country it is a continent! multiple

Key Terms and Places Imperialism in Africa - . imperialism (p. 190) – control by one country over another country’s

The Scramble for Africa - . ch. 11 sec 1. i. africa before european domination a. historical background . 1. african

Here is the world. Can you see Africa? - Hallo and w elcome to bakoteh annex lower basic school in the gambia, west

Berlin Conference: The Scramble for Africa - . in your journal:. which country are you? which parts of africa so you

South Africa - . most developed african country 5% of africans live there produces 2/5 of africa’s factory goods and

Burundi - . burundi is the smallest country in africa and it’s also a very poor country too. a large portion of people

Southern Africa - . population patterns. the people as with most of africa , country borders separate politically , not