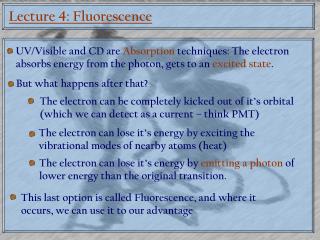 Lecture 4: Fluorescence. UV/Visible and CD are Absorption techniques: The electron absorbs energy from the photon, gets to an excited state . But what happens after that?. The electron can be completely kicked out of it’s orbital (which we can detect as a current – think PMT). X-Ray Fluorescence - . how it will be employed in sphinx?. x-ray

FCS: Fluorescence Correlation Spectroscopy - . a confocal microscope. can illuminate and detect fluorescence in a tiny

Effects of Urea and Temperature on Fluorescence of AP - . annette gorelik and brandon freidhof. objectives of experiment.