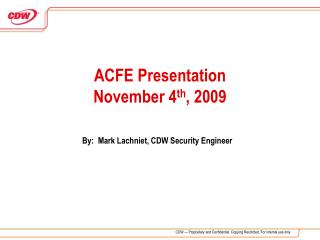 Welcome To Pastor Garry Clark’s PowerPoint presentation from the November 5 th sermon: - . information on ordering a

About the ACFE - . about the acfe. the association of certified fraud examiners is the world’s premier provider of

Immigrants and Migrants - . “we are american history.” a slight paraphrasing of oscar handlin a presentation by john