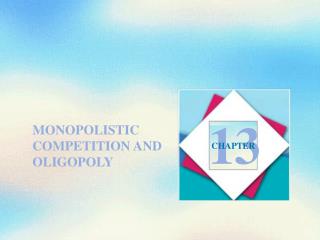 13. MONOPOLISTIC COMPETITION AND OLIGOPOLY. CHAPTER. Objectives. After studying this chapter, you will able to Define and identify monopolistic competition Explain how output and price are determined in a monopolistically competitive industry CH 27 Oligopoly and Strategic Behavior - . which of the following is not a characteristic of oligopoly firms? a)

Oligopoly and Monopolistic Competition - . what you will learn. oligopoly. monopolistic competition. take this challenge.

Competition Regime in Ethiopia: Preliminary Country Paper for the Capacity Building on Competition Policy in Select

Oligopoly - . characteristics small number of firms product differentiation may or may not exist barriers to entry.

OLIGOPOLY - 15. oligopoly. in some markets, there are only a few firms compete. for example, computer chips are made by