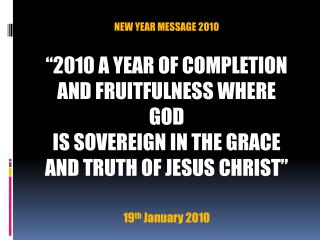 NEW YEAR MESSAGE 2010 “2010 A YEAR OF COMPLETION AND FRUITFULNESS WHERE GOD IS SOVEREIGN IN THE GRACE AND TRUTH OF JESUS CHRIST” 19 th January 2010. God chose the ‘foolish’ to confound the wise. He raise up ‘prophets’ from among themselves but they regarded them not. God Is Sovereign - . introduction. welcome pray when you introduce a new friend to people, you often share

The three year rolling (2010-2012) work programme and 2010 budget of the Office of Evaluation - . fifty-ninth evaluation