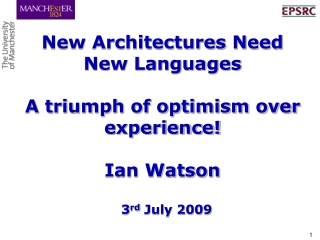 New Architectures Need New Languages A triumph of optimism over experience! Ian Watson 3 rd July 2009. ‘Obvious Truths’. Single processors will not get faster, we need to go to multi-core There will be a need for processors with many (> 32?) cores Buddhism and Survival of Death - . the four noble truths . although “buddhism” refers to a varied set of religious

Seven truths about Creation - . facts that every christian needs to hold as vital beliefs and values. 1. god created

This “Courtly Love” Thing - . truths, half-truths, and misconceptions. we are talking about an age. that did not have

Random Fundamental Principles - . bioethics . question. are there absolute truths? truths that cannot change? did the

2 Truths, 1 Lie - . directions for use: collect 2 truths and 1 lie from your students make them each a slide using the

Basic Truths - . every soul is exceedingly important! genesis 1:27; matthew 16:25. the church is “the pillar and ground

2 Truths &amp; a LIE - . approximately 2-3% of the water on earth is usable to humans the united states uses about

Two Truths and a Lie - . meet your rocs mentors. jared peters. about me. two truths, one lie. junior 1 sister, 1 brother

God And Suffering - Series: why? making sense of god’s will. god and suffering. four foundational truths:. god is love.

Slide 0 - . the lens of glory. slide 20.5. which way is the pointer going? some seem to believe that jesus points us to