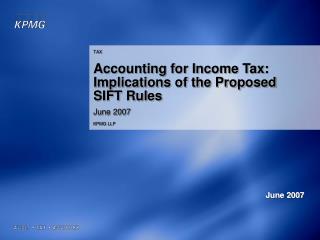 INCOME TAX PROPOSAL -2007 - 2 (1a), 57(a)amalgamation. concessions available on account of set of losses and deductible

Income Tax - . section 4:- charging section. income earned by every person during the previous year is charged to tax in

Income Tax - . what is tax?. (an amount of) money paid to the government, which is based on your income or the cost of