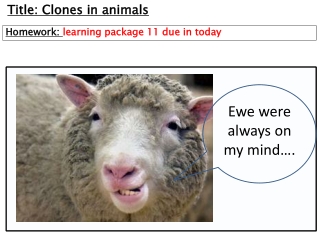 Title: Clones in animals. Homework: learning package 11 due in today. Ewe were always on my mind…. Learning Outcomes. (e) describe how artificial clones of animals can be produced; (f) discuss the advantages and disadvantages of cloning animals (HSW4, 6a, 6b, 7c). Stem Cells. 13.1 What Are Clones - ? . clones genetically identical molecules, cells, or organisms all derived from a single

TITLE? My family and other animals - . author? gerald durrell. question p.7. was all the family ill ? the eldest brother

Clones - . what have we already cloned…. medical advancements, research, cloning……. where are we all with these

Title needs to have a subject and a Verb - . student name, purdue university school of nursing. (title). (title).