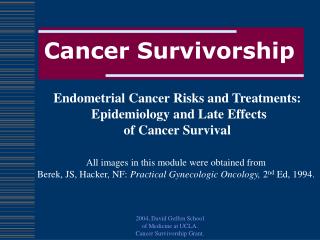 Cancer Survivorship Overview - . objectives. the learner will be able to: identify the challenges related to survivorship

Cancer and Exercise - . b. elizabeth delasobera, md sports medicine fellow. outline. the mechanism for how exercise can

National Cancer Survivorship Initiative - . june 2010. the number of cancer survivors is growing. there are now 1.77 Cancer Survivorship: How To Manage Treatment-Related Risks and Problems Outside of the Oncology Setting - . tracy a.