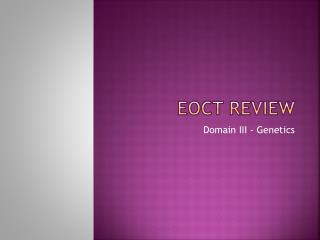 EOCT Review. Domain III - Genetics. DNA. Deoxyribonucleic acid Made up of nucleotides Sugar – deoxyribose A phosphate group One of four nitrogen bases Adenine (A) Guanine (G) Cytosine (C) Thymine (T) Is in the shape of a double helix. DNA. EOCT Review - . questions to help you all ace the eoct!! slides 1-78 with key. 1. which factor is used to determine a

EOCT Review - . biology eoct: may 14 th , 2013. cell structure. what is the difference between a prokaryote and

EOCT REVIEW - . ninth grade pre-ap lit. which word or words should not be capitalized?. a french b summer c senate d

EOCT REVIEW - . eoct 1. jeff’s wholesale auto dealership holds an auction once a month. what is the average number of

EOCT Review - . questions to help you all ace the eoct!!. 1. kim works on an automobile assembly line. kim ’ s job

EOCT REVIEW - . the nation of keilmanland needs to build a new dam to control flooding near its larges city. if

EOCT Review - . questions to help you all along your way…. question # 1. 1 kim works on an automobile assembly line.