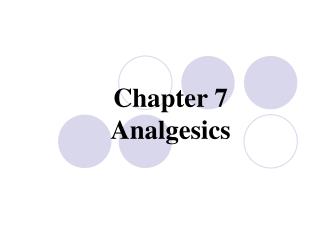 Chapter 7 Analgesics and Anesthetics(2) - . part 2 anesthetics. 7.2.1 introduction. anesthetics are used to depress the

ANALGESICS - . analgesic???????. an agent that subdues pain by acting in the cns or on peripheral pain mechanism.

Analgesics - . what is pain?. an unpleasant sensory and emotional experience associated with actual or potential tissue

Analgesics - . 1.  discuss the three different ways in which drugs can be administered by injection. state three other

ANALGESICS - . pain management. what is pain ? a protective mechanism to warn of damage or the presence of disease

Analgesics - . those who do not feel pain seldom think it is felt. samuel johnson. pain. pain is subjective and difficult