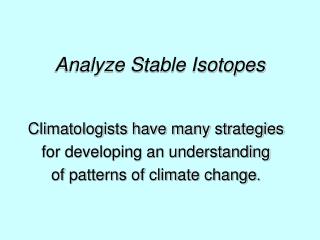 Climatologists have many strategies for developing an understanding of patterns of climate change . Analyze Stable Isotopes. Many students are familiar with the use of unstable isotopes to “go back in time”. http://www.physlink.com/Education/askExperts/ae403.cfm. Stable Isotopes - . most elements come in several isotopes. the relative abundance of these isotopes can provide

Stable Isotopes Forensics – When Isotopes Work - . using isotopic analysis to determine the source and fate of

Stable isotopes in paleontology and paloclimatology - . back to basics. parts of an atom electrons, protons, neutrons

Stable Isotopes in the Hydrosphere and Biosphere - . lecture 36 . isotopic fractionation in the