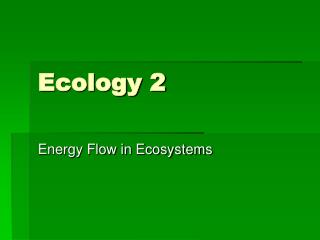 Ecology 2 - . biodiversity. biodiversity is the variety of organisms in a given area. physical factors (abiotic) have a

Ecology 2 - . energy flow in ecosystems. biodiversity. biodiversity is the variety of organisms in a given area.

Ecology Chapter 2 - All deserts are an example of. a. biomeb. biospherec. ecosystemd. community. the statement, the

Unit 2: ECOLOGY!!!! - . ecosystems: everything is connected. dead leaf falls from a tree into a stream bacteria and fungi

Ecology week 2 - . community interactions. ecosystems are influenced by a combination of biological and physical

Chapter 2 - Ecology - . ecology = the study of how organisms interact with one another and the non-living environment.

Chapter 2 Ecology - . bio q.o.d. define symbiosis. bio q.o.d. how is the growth rate of a country calculated?. what is