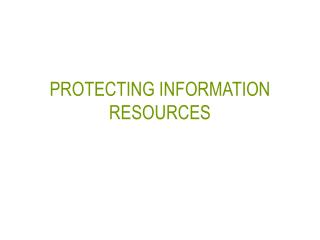 PROTECTING INFORMATION RESOURCES. Spyware and Adware . Spyware Software that secretly gathers information about users while they browse the Web Can be used maliciously Install antivirus or antispyware software Adware Form of spyware Protecting Information - . who we are. we are working on our information assurance mba this is part of our curriculum; to

PROTECTING FOOD RESOURCES: PEST MANAGEMENT - . organisms found in nature (such as spiders) control populations of most

Information Resources - . internet. the largest and best known network in the world. a worldwide network of computers