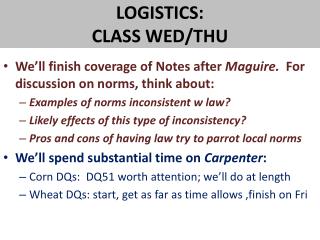 LOGISTICS: CLASS WED/THU. We’ll finish coverage of Notes after Maguire. For discussion on norms, think about: Examples of norms inconsistent w law? Likely effects of this type of inconsistency? Pros and cons of having law try to parrot local norms Class 2 - . logistics done well is all but invisible! in other words, no one really gets concerned about logistics and