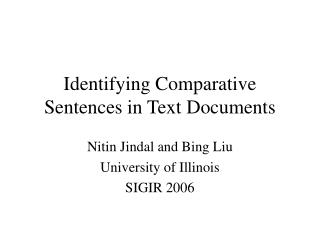 Identifying Comparative Sentences in Text Documents. Nitin Jindal and Bing Liu University of Illinois SIGIR 2006. Introduction. Comparisons are one of the most convincing ways of evaluation. Much of such info is available on the Web (customer reviews), forum discussions, and blogs. In-text citations: Government documents and reports - . apa format. steps in this tutorial. 1) state goal of this

Text Localization, Enhancement and Binarization in Multimedia Documents - Suppression of false alarms. m.... mean of the