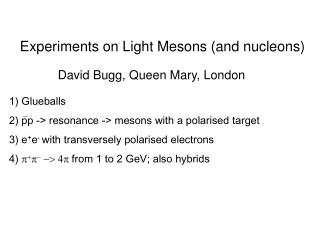 Experiments on Light Mesons (and nucleons) Experiments on Light Mesons (and nucleons)

Light Scattering - . a classical electrodynamics view. introduction. light scattering is the dispersal of light in

27.1 Early Concepts of Light - . scientists now agree that light has a dual nature which can be described in terms of

Light curves and Spectra - . sn light curves. a sn shines for different reasons, and different types of sn may only show

Light years, Theories and Characteristics of the Universe - . light year is: . distance that light travels in a vacuum in

Light scatter - . forward angle light scatter in a narrow angle from the direction of the laser beam fals or fs right

Chapter 5 Light and Matter: Reading Messages from the Cosmos - . 5.1 light in everyday life. our goals for learning: how