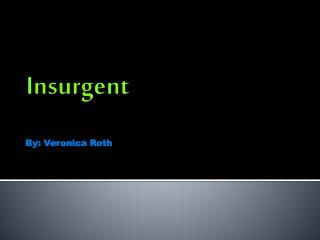 By: Veronica Roth. Insurgent. Major Characters. Tris Prior: Tris is a girl who has fought in one big battle- a war. After she gets the mind control serum out of the way, there’s one thing left to do, kill Jeanine Mathews. She will do it, but she needs help from Four/Tobias first. Insurgent - . ( n. )one who rebels or rises against authority ( adj. ) rising in revolt, refusing to accept authority;

Insurgent Citizens - . rochina: largest favela in rio. what is insurgent citizenship?. insurgency: an uprising against

Iraqi Insurgent Sniper Training - . gathered from a pro-insurgency militant website on 10 may 2005 “another look into

Resurgent Midwest, Insurgent Growth A Project of The Council of State Governments and - Growtheconomics, inc. in

Guerilla tactics [fight an insurgent war  you don’t have to win a battle, just wear the British down] - Battle of