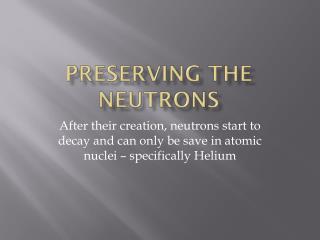 Preserving the Neutrons. After their creation, neutrons start to decay and can only be save in atomic nuclei – specifically Helium. Two Unknowns. The Unknown Quark-Gluon Plasma physical behavior The Unexplained Matter/Anti-Matter Asymmetry  why is it 1 part in 1 billion? Neutrons 101 - . properties of neutrons. canadian powder diffraction workshop may 2012 uofs. why neutrons?. even if you

Neutrons 101 - . properties of neutrons. what is a neutron?. the neutron is a subatomic particle with no net electric

Neutrons 101 - . properties of neutrons. what is a neutron?. the neutron is a subatomic particle with no net electric

Preserving the Opportunity - . how the uaga protects the potential donor, family sensitivity, and complements the plan of

NEUTRONS, PARTICLES, AND THE UNIVERSE - . dirk dubbers, u. heidelberg. a. overview. the ultimate aims of particle

How Many Neutrons? - It is not strictly true to say that elements consist of one type of atom. which sub-atomic particle