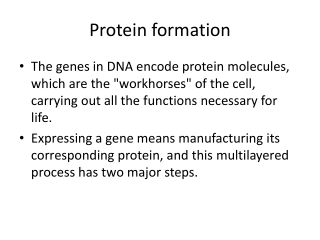 Protein formation. The genes in DNA encode protein molecules, which are the "workhorses" of the cell, carrying out all the functions necessary for life. Expressing a gene means manufacturing its corresponding protein, and this multilayered process has two major steps. Transcription. Protein Denaturation and Gel Formation - . go to slide show mode and click to begin. three proteins in their native