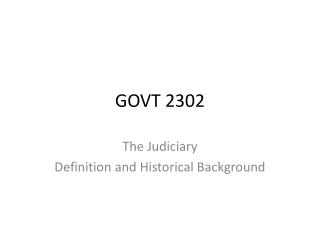 GOVT 2302. The Judiciary Definition and Historical Background. This begins a discussion of the last of the three institutions of American and Texas Government. - Judiciary . - United States Federal Courts . - Texas Judicial System . GOVT 2306 - . the texas declaration of independence. as with the united states, the nation of texas, started with a

GOVT 2302 - . the personal presidency the contemporary executive. in this section we discuss the “personal”

GOVT 2306 - . the development of state constitutions and the texas