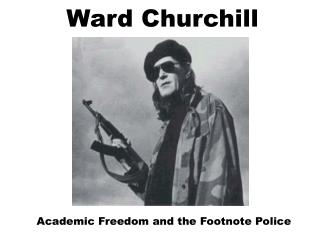 Ward Churchill. Academic Freedom and the Footnote Police. Who is Ward Churchill?. Churchill is of American Indian ancestry through both his parents, and has stated that he is an enrolled member of the United Keetoowah Band of Cherokee Indians. The Ward Churchill Case - . academic freedom, politics and the right to free speech. [click to meet the players]. ward

Churchill Trivia - . where did he want to be buried? westminster abbey blenheim chartwell answer: chartwell how many

Roosevelt and Churchill - . roosevelt. franklin d. roosevelt was born in 1882 at hyde park, new york. he was the 32

Sir Winston Churchill - “it is the ability to foretell what is going to happen tomorrow, next week, next month, and