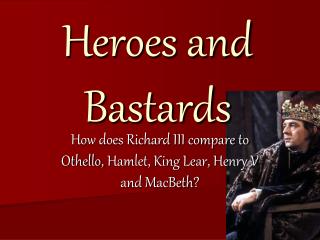 Heroes and Bastards. How does Richard III compare to Othello , Hamlet, King Lear, Henry V and MacBeth ?. Othello. Othello lets his emotions run his life, much like Richard III in the later stages of his reign . Heroes and Villains - . helpful . wicked. some heroes and villains

Heroes And Villains - . mariela gutierrez. fictional hero. he is my hero because, he was trying to help the save the

Heresies and Heroes - Three views on history.... there is nothing new under the sun" ecclesiastes 1:9history is more

Heroes - . by asiyah. my criteria for a hero. a hero is someone that : t ries to make positive change cares about others

Heroes - . why do superhero movies do so well? why do we want heroes to be real?. what kinds of people are celebrated as

Heroes - . theme 5. selection 1. selection 2. selection 3. heroes. who are some of your heroes? why do you respect them?

Heroes - . dedicated to the brave people in sichuan earthquake,

Heroes - . a journey through life. “each of us has a hero, a sage, a mercenary, a princess within. each of these pulls