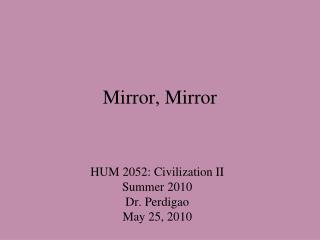 Mirror, Mirror - . by shel silverstein. queen. mirror, mirror on the wall. who is the fairest of them all?. mirror. snow

Mirror - Reflection. 1. write you name underneath the line below. now try and write the mirror image of your name above

Mirror, Mirror, on the Wall - . a study in chirality. what an isomer is? how many kinds of isomers there are? (hint –

Mirror Mirror In A Spoon - Bacteria hysteria. my experiment was about how to show how bacteria grows like for instant as