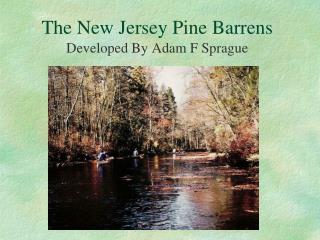 The New Jersey Pine Barrens - Pinelands. the pinelands is our country's first national reserve and a u.s. biosphere

The Pine Barrens - . what we need to know for their conservation. three things. 1. we can’t control their past, but we

Pride of the Pine Barrens Endangered Species - . by: wilmarielle cambrelen grade 6 talent 21 . don’t you want to