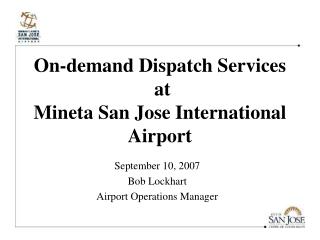 Unit 3 At the Airport - . topic 1: booking flight tickets. background information. when you plan to have a travel by air,

Mindshare VoIP Dispatch System - Welcome to mindshare, the answer to your dispatch center needs from an individual

34 The Influence of Monetary and Fiscal Policy on Aggregate Demand - . aggregate demand. many factors influence aggregate

Supply and Demand - . chapter 4. laugher curve. q. what do you get when you cross the godfather with an economist? a. an

ACCOMODATING A380 OPERATIONS AT MIAMI INTERNATIONAL AIRPORT PROJECT STATUS - . presented by josé a. ramos chief of

The Concept of Demand - . the demand for goods and services. objective:. to determine how people respond to price changes