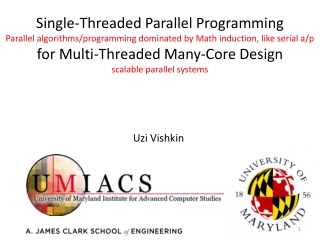 UZI GRINDLER‏ - My name is uzi grindler and i am a web designer. please follow me at my goole profile and get latest

uzigrindler commonly known as Uzi - , is a retired footballer. popularly dubbed "the phenomenon", he is

The Models of IMI UZI Firearm – Know about them - Kellyenterprises.net, llc has some of the best conditioned models of

Advanced Parallel Programming with MPI - . slides are available at

An Introduction to Parallel Programming and MPICH - . nikolaos hatzopoulos. what is serial computing?. traditionally,

Goals - . provide a comprehensive survey of the state of the art in grids &amp; grid technologies present concepts