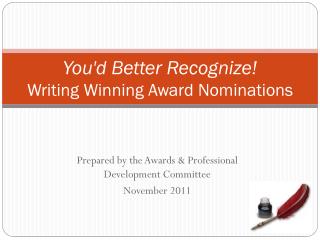 The Dean’s Award for Good Writing

The Nominating Process - . chapter 7—section 1. nominations are important. it is the prime function of political NOMINATION FORM - The time 2 shine awards november 2013, to be held at the historic dockyard, commissioners house .

How to Develop an Award Winning Budget - Asbo international’s meritorious budget awards program. how to develop an

Top 8 Reasons To Choose UpsideLMS - Choosing an lms? find top 8 reasons why you should choose upsidelms - an award