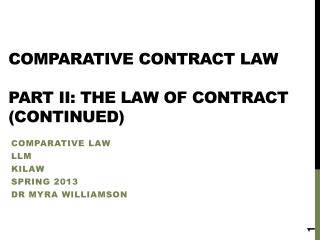 Comparative Contract Law Part II: The law of contract (Continued). Comparative Law LLM KiLAW Spring 2013 Dr Myra Williamson. The story So far…. There are 4 main elements, all of which need to be satisfied, to form a contract in the English common law: Offer and acceptance Part 3 – The Law of Contract - . chapter 10 the requirements of form and writing. overview. formal and simple contracts

CONTRACT LAW - . at the end of this lecture you should have an understanding of: - how contract law developed in

Part 3 – The Law of Contract - . chapter 12 the extent of contractual rights. overview. privity prior interests in land

Contract Law - . requirements: meeting of the minds offer —a conditional promise acceptance —made by the party to

Part 3 – The Law of Contract - . chapter 7 an introduction to the legal relationship. overview. historical development

Contract Law - . target. i can explain and identify all five elements of a valid contract. contract:. a legally binding

Contract Law - . the law of contract. most relationships between the stakeholders in business are governed by contracts.

Contract Law - . what is a contract?. a voluntary agreement between two or more parties. 3 parts of the contract. “can

Contract Law - . formation and legality class 2. the whole duty of government is to prevent crime and to preserve

Contract Law - . what is a contract?. a contract is an agreement between 2 or more people to exchange something of value.