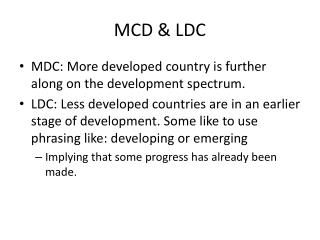 MCD & LDC. MDC: More developed country is further along on the development spectrum. LDC: Less developed countries are in an earlier stage of development. Some like to use phrasing like: developing or emerging Implying that some progress has already been made. HDI: Human Development Index.