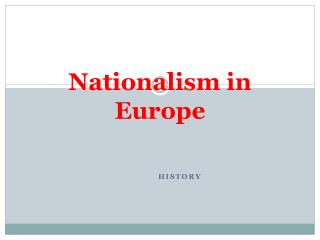 Nationalism - . social studies 9 ms. rebecca. do now:. what country are you from? what country do you call “home”? do

Quebec Nationalism - . duplessis era. from 1936-39 and 1944-59 quebec was controlled by premier maurice duplessis and the

American History One Unit Four - . antebellum america. how did the forces of nationalism, sectionalism and expansionism

Being Twenty Something In Europe - . february 2005. beliefs and behaviours change constantly, especially among young

Chapter 19 Section 1 - . world war i begins guided r eading activity. how did the following help to ignite the war in

Goal 10 World War II - . causes. the rise of dictators. mussolini and fascism in italy. the first major dictatorship in

1914 Europe - The triple alliance vs. triple entente (the central powers) (the allied powers). 1914 europe. the ottoman