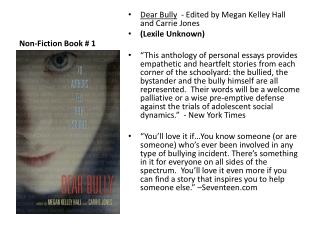 Non-Fiction Book # 1 - . the sociopath next door - by martha stout lexile

Our Chocolate Non-fiction Book - In year one we have been learning about non-fiction books in literacy. we decided that

Non Fiction - . what’s the difference????. books that are nonfiction are about real things, people, events, issues

Non-Fiction - . an introduction. what is non-fiction?. non fiction is the opposite of fiction fictional literature is