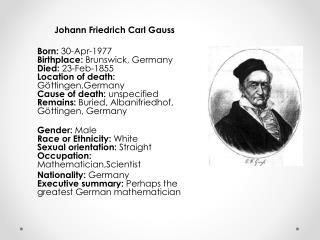 &quot;Mathematics is the Queen of the Sciences.&quot; - Carl Friedrich Gauss - Tapping into ti-navigator

Carl Friedrich Gauss - . carl thought his teacher a lesson!. when carl gauss lived and die. gauss was born in 1777. he

Friedrich Froebel - . the purpose of education is to encourage and guide man as a conscious, thinking and perceiving

Friedrich Schiller - . info on friedrich . friedrich was born on november 10, 1759 in marbach am neckar germany. he died

Gauss and the Method of Least Squares - . teddy petrou hongxiao zhu. outline. who was gauss? why was there controversy in