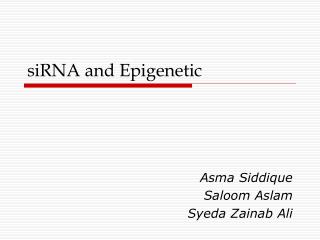 Epigenetic phenomena - . epigenetics refers to genetic inheritance that is not coded by the dna sequence it includes

Epigenetic Analysis - . bios 691- 803 statistics for systems biology spring 2008. kinds of questions. where are the

Epigenetic Service - Epigenetics, encompassing the wide range of heritable changes in gene expression, which do not