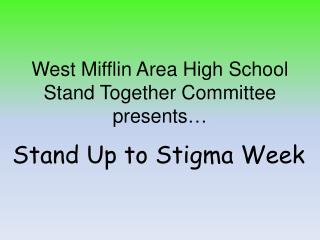 West Mifflin Area High School Stand Together Committee presents…. Stand Up to Stigma Week. Who we are…. Standtogether.pittsburghcares.org. Our Goal Fort Mifflin philadelphia , PA - . fort mifflin , was commissioned in 1771 and sits on the delaware river below