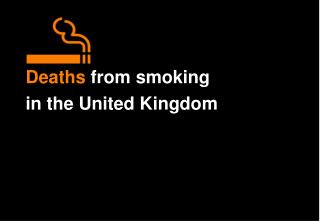 Hazards of Smoking on General Health - Summary of actual presentation for patient education. hazards of smoking on

Health risks of smoking - . principal fatal diseases caused by smoking are cancer, copd and cvd in addition, smoking is

OUR WORLD PROJECT Death Rate of China from Smoking Every Year - . seba el-aker 6d. were a circle together. one world. one