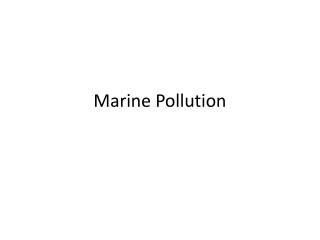 MARINE POLLUTION: - Marine litter (debris) = all objects that do not naturally occur in the marine and coastal

marine pollution - Human effects on the marine environment. alteration of bottom by dredging; shoreline alteration and

Marine Pollution - The introduction by man, directly, or indirectly, of substances or energy to the marine environment

Marine Pollution - . objectives: explain how marine debris enters the ocean ecosystem and the impact it has on the marine

Marine Pollution - . for most of human history people relied on the “dilution philosophy”. this is the mistaken

marine pollution: - Nutrient pollution . nutrients are essential for life in the oceans but . there is growing concern

MARINE POLLUTION - . introduction. pollution in ocean is a major problem that is affecting the ocean and the rest of the

MARINE POLLUTION: OIL - Oil is a actually natural component of the marine ecosystem. but increased use of oil as a: fuel